Sandbox That Converts From Lid to Bench Seats 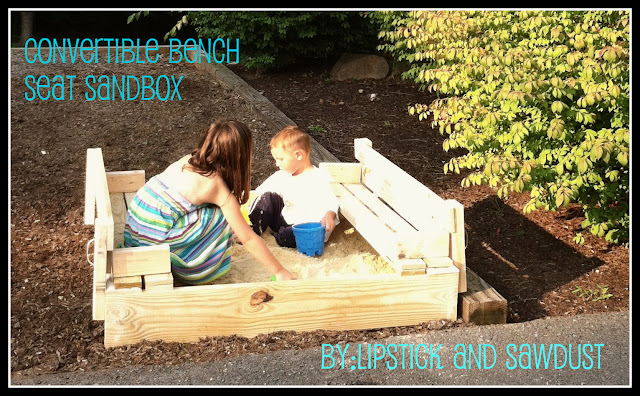 Finally a project for my son! Even though my daughter is just as fond of it as he is. I was tired of cleaning up dirt and mulch from all over the driveway, and decided to build a sandbox for him so he would spend more time in the sand than in the mulch. I wanted one with a lid to keep cat poop and other gross things out of the sand, so what better than a lid that tuns into bench seats! Better yet one that my kids can operate.

I almost feel bad labeling my name on the picture as I have to give all the credit for this plan to Ana- White's website.  I found this plan under sandbox with bench seats, this plan was designed by Gina at Lady Goats. It only took me about 4 hours to build this great sandbox, it would have been easier had I not tried to "improve"the plan. Which caused me much more heartache than if I had just followed the plan to a T!

My first piece of advice is to watch this video I made of my daughter opening and closing the lid. It will help you understand how to maneuver the lid and exactly how everything works especially with the all of the hinges, and the direction they go. I wish I had seen a video first before I built it, as I have to visually see it in motion in order to build it. Sorry, my voice is a little loud in the video, you may want to turn the volume down. ;)

Here's how I built it.

The original plan calls for treated 1x8's for the base which I thought may be a little too flimsy for all the rough play that my kids do. So, I decided to make it with treated 2x8's instead. This was a big mistake because, of course it makes the overall size of the box bigger. It also changes all the measurements of the top panels, which in the end created a mess and I was short 2 1x4's which I was hell bent on not going back to the lumber store to buy more lumber. So, if you go to build this sandbox, you can do it with 2x8 bases just buy an extra 1x4 and save yourself time and stress. FYI- the 2x8 does create some more stability, so I think that will be a good move for the future.

First, I squared up the 2x8's to create a box. Please note two pieces are shorter 47 inches long, and two pieces are longer 48 inches long because you want about an inch overhang for the 1x4's to have a little more stability. I counter-sunk 3 2 1/2 inch deck screws at each joint.

Then, because I was short two 1x4's at 50 inches long, I decided to use two scrap panels of white, thickly painted trim as my first panels, this was a good solution so I would not have to spend more money on lumber. I added two 50 inch panels to the ends, as the plan calls for, using wood glue and counter-sunk deck screws from the top into the 2x8. 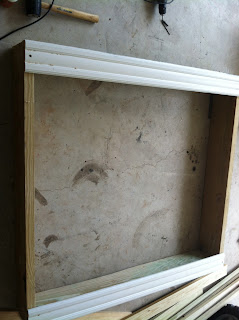 Next, you need to add another 50 inch 1x4 to each end spaced at 1/2 inch apart. Again attaching with 2 2 1/2 inch deck screws counter-sunk from the top.

Then it was time to build what will become the seats. You take two 1x4's at 50 inches and add two 2x4's (the arm rests) at 8.5 inches long and attach them...like this:

You will need to build two of these! 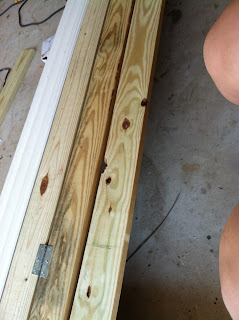 My suggestion moving forward is to build one side of the rest of the sandbox entirely then do the other side. It took me FOREVER to figure all the hinges out. I was confused by the pattern and thought I needed only 4 hinges, but I needed 4 SETS of hinges making it 8 total hinges. I ended up using 3 inch cabinet hinges (they have 3 screws each).

Then, you lay the seats with armrests back on the frame, and add two hinges. You are attaching the two  hinges to the second stationary 1x4.

Next you build what will be the backs of the bench. The plan calls for two planks (1x4's) attached to a 12.5 inch 2x4 laid flat. Because I was short two 50 inch 1x4's I had to use 47 inch ones, that's why the second plank is shorter, in the end it was ok...You attach the 1x4's with glue and 1.5 inch countersunk screws from the top. Bad picture but- maybe you get the idea?

Next you attach the seat back to the seat with two more hinges.

Then I did the same thing and completed all of the pieces on the other side.

Then, I closed the whole thing, and asked my almost 6 year old daughter to try and come open the box, so I could determine where the handles would go to open the lid. I attached the handles.

Then, I added a black liner, you know the stuff you get to line garden bottoms, or planter boxes. You don't want a tarp- you want something that can "breathe" so you don't get mold. I flipped the box over and cut it to size of the bottom frame and stapled it to the bottom.

Then I stood it up to get ready to move it. 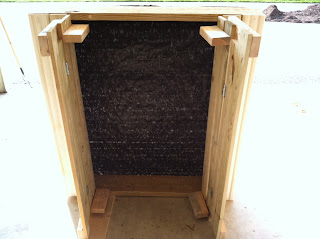 My daughter testing out the smoothness of the hinges:

Then we moved it to the spot in the play area that I wanted to keep it. We ended up buying 6, 50 pound bags of sand for the box. It filled it nicely. But in the end I ended up spending more on this project than I intended. Oh well, we can't put a price on our children's happiness can we?? 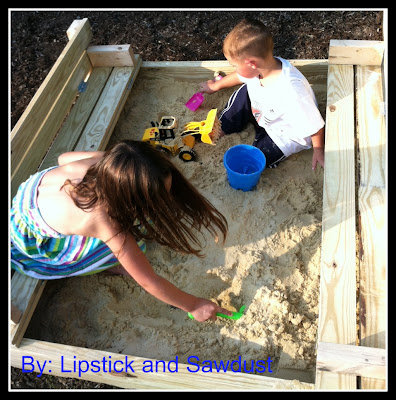 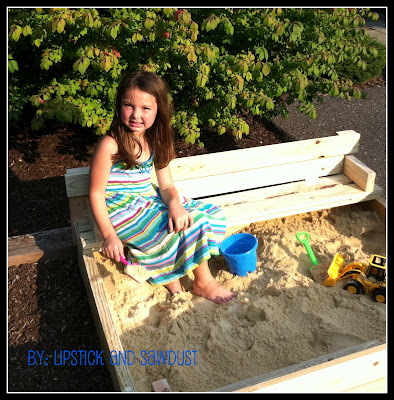 Hope you loved this project as much as I did!

Note: The only bad thing that comes with having a sandbox, is having sand all over the house when then come inside afterwards. I am forcing my kids to de-robe in the garage before they come in.

Posted by lipstickandsawdust at 9:39 AM