The BAR is completed! 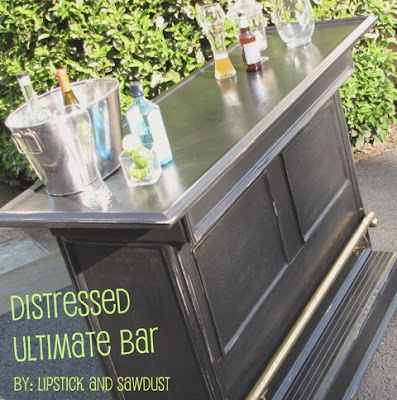 Soo happy this project is complete! It has been a long process here is "the bar" back story:

I saw this bar at a friends house and asked, "Hey what are you gonna do with that? How about I take it and re-build it into something awesome?" The reply:"Um... sure". This bar was built by my brother and a few of his friends when they came home from the Middle East in the military. It was made with 2x4's and some plywood. It was made in 2002, I know that because it was stamped 2002 on the wood in the back. Over the years they added bottle caps, beer advertisements in cardboard and decorated it every time they had a party.

This was last October..and this is what it looked like: 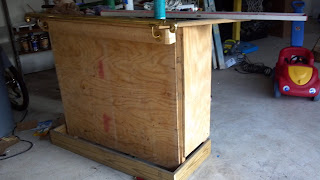 Actually, I am wrong, this is what it looked like after I removed a hundred and one nailed on beer caps and about 30 beer boxes, stapled on. The adorned bar was starting to show its good "bones" and potential. I can't believe I did not have a picture of the total before pic, but this is all I could find. The top was a trapezoid shape with black shiny tiles. Here's what I did, over 7 long months.... 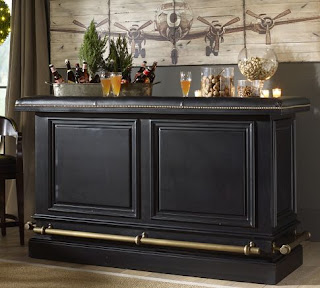 First, I found my inspiration for the bar. Pottery Barn's Ultimate Bar:

I figured, this can't be too hard to build. The bar already has great "bones".

First, I tore apart the top of the bar, I removed the tiles one by one, that turned out to be a waste of time because in the end I just removed the entire top.

I built my own top that consisted of two maple wood plank pieces actually flooring pieces, tongue and grooved together. I attached those to the top. I recovered the front plywood with again two pieces of tongue and grove maple flooring.

Near the top, I added an overhang piece and put trim around the overhang front piece.

Then I built my shadow boxes on the front out of trim. 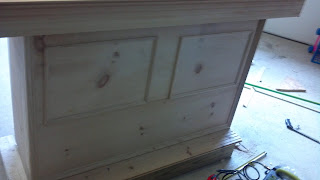 To be honest my skills last Fall were not as developed as they are now. Not that they are perfect now, but my point is that this project involved a TON of wood filler. I mean this thing has probably 10 pounds of wood filler to fill in my mis-cuts and holes. Its hard to tell now, but it took a lot of finishing work to make it look right.

Onto the bar top, the Pottery Barn Top has leather upholstered cushiony arm rests. I even made those with 2x4's cut to size and cushioned and upholstered them, not with leather... (but out of pleather). That was hard work, but in the end, I did not like the way it looked, so I simply added trim to the bar top to make it look fuller.

Moving on to the back of the bar. I covered the back with panels and trim, and more wood filler. I built shadow boxes on the side as well, just like the Pottery Barn version. Then I built a shelf in the back to hold liquor bottles or glasses or whatever.


Now the bar was in a pretty finished state... 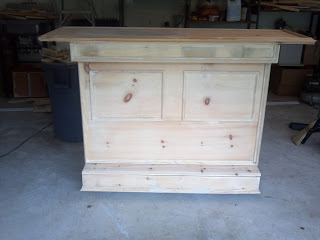 Since this thing was soooo big and heavy I decided to make it easy on everyone involved and add casters to the bottom. This was not easy as I had to tip the bar over onto its side each way and screw in the casters to the frame (2x4's). This in the end made it easier to do the finish work because I could move it on my own and spin it around.

Considering the wood was sooo beautiful, with tons of character, I really, really, wanted to stain it, with my favorite mix of stain. It really would have been beautiful. I debated over if I should paint or stain....Turns out the stain would have showed too much of the wood filler etc. It would have been not as pretty as a typical stain grade piece. So reluctantly, I decided to paint it. Sometimes just for fun, I imagine it stained, it is so beautiful in my head....ok, back to reality.

Next, proceeding with the painting I sanded it all down, and primed the whole thing with a sponge roller. I used killz primer in a container in white, really if you are painting something black you want to use grey primer, but they did not carry the grey one at HD in the Kilz brand, my favorite. Maybe I should get Kilz to sponsor my blog huh? Since I mention it in almost every post... 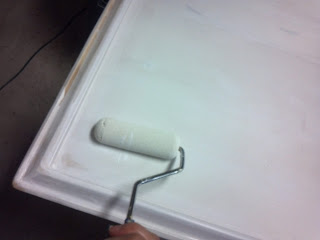 I let that dry: 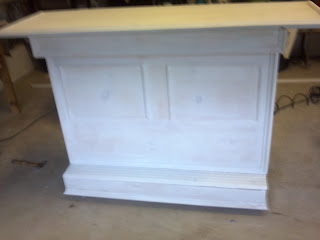 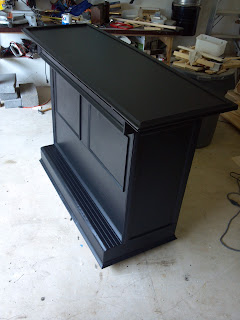 After the paint had dried completely, I distressed it in random areas with my sanding block and dremmel tool sanding bit. It was difficult to sand through the primer to get to the wood, hence the dremmel tool. 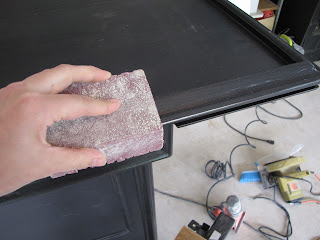 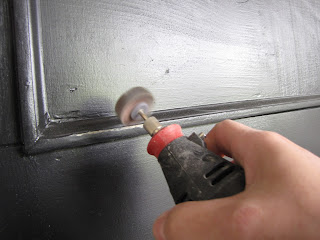 After the wood was exposed, I used some leftover stain and applied it to the wood using a q-tip, then wiped clean with a dry rag.

To protect the piece, I covered it with paste wax a few times. The finish is not "perfect". Actually, I wish I would have spray painted the whole thing instead of hand painting it. I think it would have turned out better.

In the end I added the brass foot rest. I polished it, because it was not in the best shape from all of its use as an "arm rest" in the previous design. I used .....ketchup... of all things to polish the brass! I found this tip online, I guess between the vinegar in the ketchup and the grittiness, it polished brass pretty well, it turned out alright I'd say.

For the installation of the brass, I needed to install first the brackets, that was pretty easy, I just screwed those onto the wood panel near the bottom of the bar. Then came attaching the tube, this was a pain to do because I am not used to working with brass screws being attached to brass, etc. I ended up having to put stabilizers inside the tube and screw the screws into them. 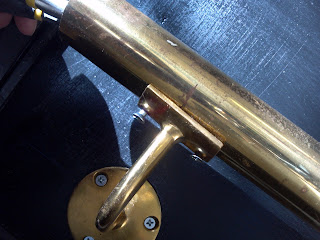 Then added the end-caps. It turned out pretty nice. 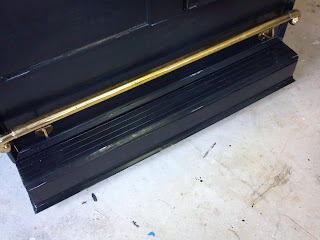 Here are some final pics, all staged up. The sad thing is... don't let the picture fool you, I was not having a party when I took these pics. I was home alone. Sad. I know, but I could have cared less about being sad because I had this beast finished!!!! 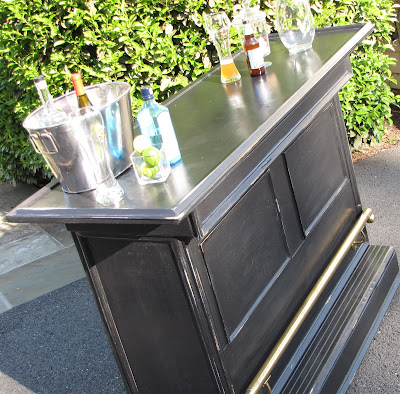 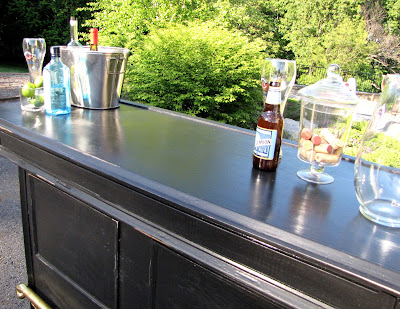 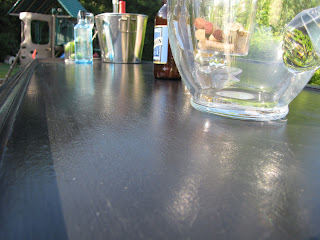 Hope you enjoyed this project. I think I will be taking a break from projects this big... or maybe not.
Not sure... building things runs through my blood like fire!

Posted by lipstickandsawdust at 9:34 AM